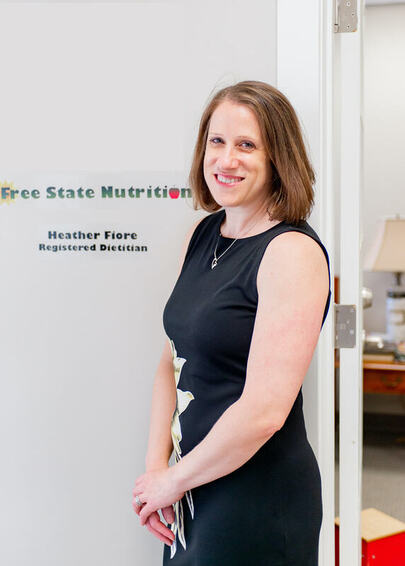 ﻿​My Story﻿
​People often think of dietitians as “The Food Police” or some kind of perfect eater who never eats dessert. I’m neither of those things! Most dietitians I know initially went into this field because they overcame some kind of struggle with eating which then sparked an interest in nutrition. We RD’s are taught not to be judgmental about our clients’ food choices, but most of us aren’t because we know how hard it can be.

My struggles with eating started around the same time as puberty. I didn’t like how my body was changing, and I found myself in a disordered eating pattern of restricting and bingeing.
After a short “success” with Weight Watchers, I rapidly regained the weight I lost and then some. Instead of learning healthy eating habits, the message I got was some foods are “good” and some foods are “bad”. This way of thinking did nothing for the guilt and shame I felt when I overate and made poor food choices – in fact, it amplified it.

My negative body image and disordered eating continued through college, during which time my weight climbed to an all-time high despite regular physical activity and attempts to control my eating.

I initially resisted studying nutrition, but I decided to try a nutrition class out of desperation to get out of Engineering (I started college as a Mechanical Engineering major, which may have matched my academic skills, but did NOT match my personality). It was during this first class that I heard a lecture by a woman named Terry Garrison, the author of a book called Fed Up. Terry talked about getting away from the diet mentality through size acceptance. Though it took me a few years to really internalize this message, I never forgot it during my years of study.

The concept of size acceptance was what finally helped me break the cycle of disordered eating and start enjoying food without guilt. I started simply with looking at myself in the mirror - really looking - and telling myself I'm ok. I worked hard to drown out the voice of negative comments with positive ones (this is an ongoing process!), and I eventually started to believe it.
My next behavior to tackle was bingeing. I was tired of feeling sick after meals and focused on the simple goal of feeling comfortable after eating. I began leaving a few bites of food on my plate at each meal, simply to show myself I could. Over a long period of time I managed to get back in touch with the hunger and fullness cues from my body that I had been ignoring for years.
Armed with the knowledge of nutrition I gained in college, I worked on developing healthy eating habits that made sense to me and allowed for treats as frequently as I wanted to prevent that feeling of restriction. Now I love food as much as I always have, and I enjoy it more!

Though I am by no means a perfect eater (whatever that means), the difference now is how I handle indiscretions, poor choices, and weight changes. I’m no longer obsessed with the number on the scale or the parts of my body I like the least. Instead, I choose to focus on what I like the most, and that motivates me to take care of my body by staying active and making healthy choices most of the time (and being ok with it when I don’t do either of those things).

My transformation from disordered eating, weight-obsession, and negative body image to a healthy lifestyle, positive body image, and freedom from guilt about food is something I don't take for granted. I worked hard to put food in its proper place in my life, and I wish for the same for all women suffering the way I did. I'm so lucky to be in a position to help others!

​If anything you've read about my story rings true for you, please schedule a call with me today to find out about getting started on the path of enjoying food more and stressing about it less!
(back to top)
My Philosophy
I always approach my clients with a focus on mindfulness, enjoyment of food, and individualized advice.  No single eating pattern is right for everyone, but I will help my clients make sustainable changes that work for them.
When I work with children, I take the needs of each member of the household into account. I help families sort out what everyone's role is when it comes to meals and snacks.
(back to top)
​My Experience
I spent 12 years working with families of children with diabetes and those at risk for developing diabetes. I have helped families to establish healthier habits to prevent disordered eating, poor body image, and negative health effects of excess weight. Additionally, I have experience working with pregnant teens, pregnant adults, college students, older adults and many other populations.
(back to top)
​My Training
With more than 20 years of experience as a Registered Dietitian, I have a passion for nutrition.  I received my undergraduate degree in Nutritional Sciences from Cornell University and later completed a Masters of Science in Health Education at SUNY Brockport.  I received specialized training in adolescent nutrition through the interdisciplinary Leadership Education in Adolescent Health program at the University of Rochester School of Medicine and Dentistry.  I am also a Certified Diabetes Care and Education Specialist and licensed in the state of Kansas to practice dietetics.
(back to top)